A comparison of the EU and the USA

The origins of the Single European Sky are partially to be found in a comparison of the performance between these two air traffic management systems. There are numerous reasons to compare the two, including the fact that Europe and the contiguous United States are similar in size. The air transport systems on both continents also share commonalities when it comes to traffic density and their high safety standards. The area under air traffic control and the number of passengers are also approximately the same. Air traffic in Europe is concentrated in Central Europe, i.e. in the FABEC area. In the USA, by contrast, traffic density is concentrated on the west coast and, even more so, on the east coast.

In the United States, there is one air navigation service provider while there are many in Europe, with each country having its own. This is often described as fragmentation. If the number of operational air traffic controllers is taken, another perspective is revealed. There are 40 percent more control sectors in the airspace of the United States than in Europe.

At the beginning of this millennium, European air navigation service providers had significantly higher costs. This has changed substantially in the past few years. Today, total costs in the U.S. are 17 percent higher than in Europe. Seen in relation to passenger miles — a standard indicator in commercial aviation — European costs are 34 percent lower than in the United States.

ATM in Europe - It’s all about performance 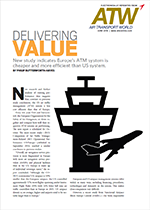