European aviation is reaping the benefits of increased demand for air travel. A liberalised aviation market has encouraged airline networks to expand and passenger numbers to rise. The strong growth, however, is accompanied by unpredictable traffic patterns, with steep increase on some routes and others in decline. Seasonal fluctuations also impact traffic flow, demanding extra resources during the summer months to handle additional flights.

Air traffic management is just one of many factors behind increased delay in 2018. Airline operations remained the main cause of primary delay across Europe, contributing 24% to the average delay per flight according to the EUROCONTROL CODA digest, compared with 12% attributed to Air Traffic Flow Management (ATFM). However, while the airline contribution rose marginally over 2018, ATFM increased significantly, especially in the en-route sector, with air traffic control capacity, staffing and weather the largest contributory factors. 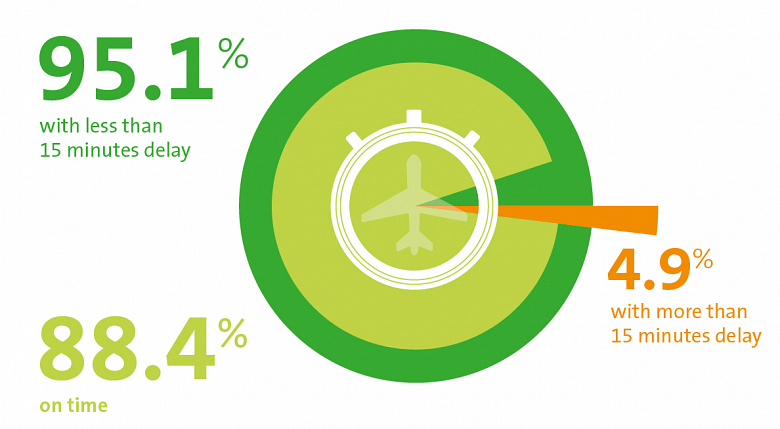 FABEC ANSPs worked together in 2018 in order to help provide capacity when and where it was required. In 2018, 95% of all flights operated in FABEC en-route airspace with less than 15 minutes of delay, while 88.3% of all flights experienced no delay at all in the upper airspace. However, this is more delay than both of the previous two years, when more than 97% arrived within 15 minutes and over 92% experienced no delays. This is because traffic growth is stretching available resources, and will continue to cause delays until additional controllers are recruited and infrastructure upgraded.

FABEC ATFM delay reached an average of 2.14 minutes per flight, compared with 1.15 minutes in 2017, and above the Reference Period 2 (RP2) target set in 2014 of 0.42 minutes per flight. ATC capacity and staff shortages accounted for over half of ATFM delays in 2018, with weather responsible for nearly a quarter and industrial action 10%.

Training and recruitment activities are underway to raise the number of controllers on busy sectors and enable more flexible working arrangements. With long lead times of up to five years to train a new controller, ANSPs introduced measures such as flexible rostering to help manage sudden peaks and troughs in traffic. Busy area control centres at Karlsruhe, Maastricht and Rheims also agreed mitigation measures with the Network Manager to re-route flights through adjacent airspace, or lower airspace, to reduce the amount of traffic passing through congested sectors at peak times. This activity saved an extra five million minutes of delay, or 0.5 minutes per flight, during a period when full year delays reached a total 19 million minutes across the continent. It also prompted the Network Manager to adopt and expand on the measures introduced by FABEC in 2018 to deliver enhanced capacity during 2019. 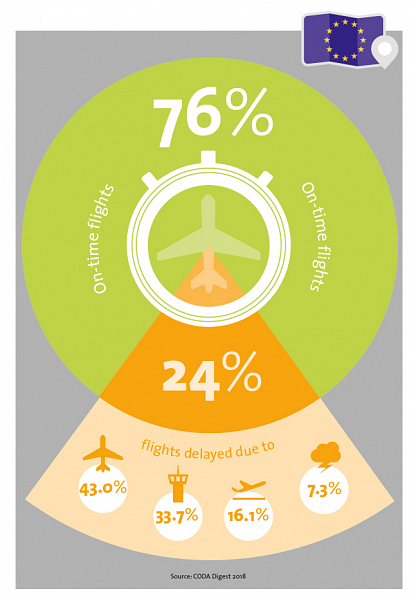 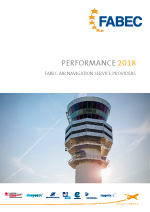