Free Route is an operational concept which is replacing the traditional air routing system. Principles have been developed on a European level while implementation and accountability remain with local air navigation service providers. FABEC is pursuing a common implementation project based on a stepwise approach. The first implementation steps have already taken place in the upper airspaces of Belgium, Luxembourg and the Netherlands followed by Germany and France. Currently, and in the upcoming years further steps will follow in France and Switzerland. 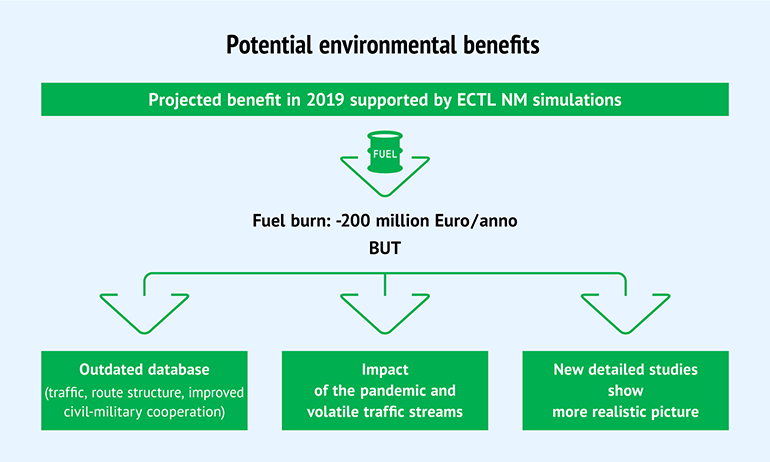 The principle of Free Route replaces the former complex routing system with navigation points at sector borders. Airspace users are free to plan their route from navigation point to navigation point. In cases where there are, for instance, military training airspaces within the sector or safety conflicts with other aircraft, intermedia points can be used.

Free Route is not confined by borders but extends Europe-wide under EU Implementing Regulation 2021/116 that is due to come into effect at the end of 2025. FABEC has signed an agreement with adjacent FAB CE to establish a cross-border interface with the Southeast Europe Common Sky Initiative Free Route Airspace (SECSI FRA), linking German and Austrian airspace in a staged process beginning in 2022. This follows agreements already in place with Denmark and Sweden to allow airspace users to plan optimal flight paths while taking into account airline preferences, weather events, military training and safety aspects.

Aircraft can fly through airspace on a direct path, without detours, using the shortest route. This saves fuel and reduces emissions. The larger these airspaces are, the greater and more sustainable their effect.